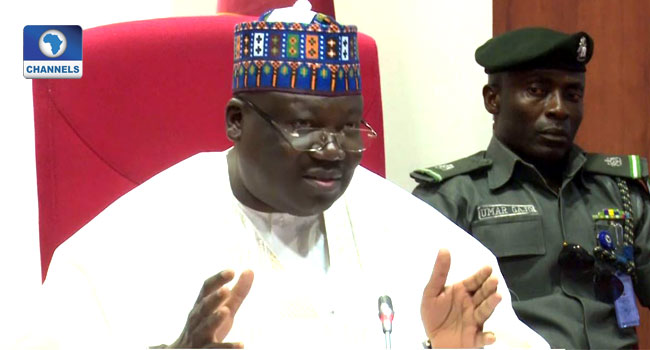 Mr Lawan, while speaking to a group known as ‘Forum of Senators’, made up of past and present senators, who paid him a courtesy visit in his office, revealed that he receives N750, 000 as salary.

“I never believe that there is anything called jumbo pay to the National Assembly.

“NASS members, both Senate and House, receive what is their salary; I receive 750,000 as my salary.”

He explained further that part of their functions includes oversights and assured that the 9th National Assembly will take it seriously with proper funding.

“We are going to be very serious and systematically entrenched with oversight, any minister or CEO of an organisation that is expected to function must function.

“I need to function as a senator, my office needs to be properly funded and therefore, I cannot conduct my oversight without some funding.”

The Senate President also explained the need for more engagements with the public and why it is important for the continuation of ‘OpenNASS’ initiative introduced in 2018.

“So I believe that we should continue with OpenNASS; in 2018, we had the first version of it where individuals and NGO’s were invited and we had a lot of activities with the public, we will continue with the tradition and try to enhance it,” he added.

This is what I actually said about Insecurity in Nigeria, Osinbajo Clears Air

INTERNATIONAL YOUTH DAY: Our Rights are Being Violated – YPAN

Eid-el-Kabir: Lagos YPAN Celebrates with Muslim Faithful all Over the World

US Navy Award Nigerian a Medal for Exemplary Accountability

A Comet in the Sky; Humans and Death

INTERNATIONAL YOUTH DAY: Our Rights are Being Violated – YPAN