The Oyo State police command and the Federal Road Safety Corps (FRSC), within the state have reacted in a different way on the number of casualties involved in the accident, which involved a Toyota Hilux Van of FRSC and a Micra taxi in Ibadan, the state capital on Friday.

NAIJA NEWS LIVE recalls that a van of FRSC collided with the taxi when the FRSC were chasing the taxi driver alleged to have violated traffic offence.

It was gathered that many individuals escaped death when FRSC officers engaged the Micra driver in a scorching chase, ensuing in the death of 1 particular person with others sustaining injuries. The FRSC van marked 1139 (3) and the Micra automobile with number plate Lagos 831 DH were badly broken as they each plunged right into a deep ditch.

An eyewitness stated that, “We noticed how the FRSC officers have been pursuing the unpainted commercial car. The officers have been trying to overtake the car and in the process each of them plunged into this wide gap by the roadside. We have been informed that the FRSC have been chasing the car because it was not painted the normal commercial color. The passengers in the car have been shouting and pleading with the officers not to threat their lives, however they didn’t heed their pleas. 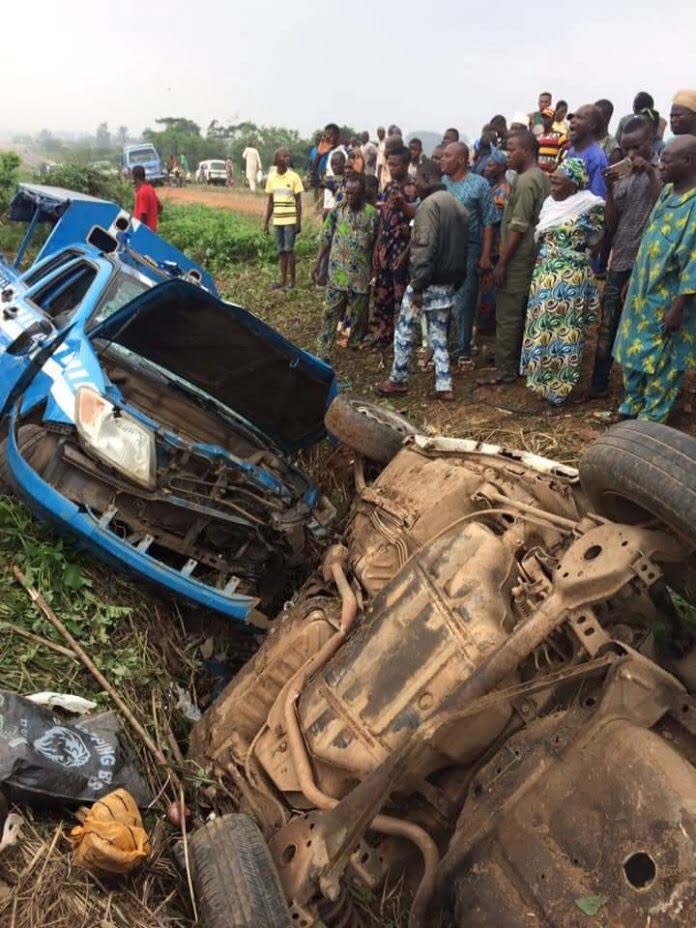 “Like a film, we just saw and heard a deafening noise after they crashed. The Micra automotive summersaulted before it crashed into the ditch followed by the FRSC van. The driver of the Micra car had stopped breathing by the time they carried him. Different 4 passengers in the automobile were critically injured when they pulled them out. Blood covered them throughout.”

However, the police and the FRSC have completely different record of what occurred.

While the police command, Friday night confirmed the death of one person, the state sector command of FRSC stated on Saturday that no one died in the accident which occurred on Friday.

Police spokesman, Olugbenga Fadeyi, on Friday informed journalists that, “The incident occurred in Akinyele Local Government. We gathered that they had collision and both plunged right into a ditch.

“One person, as at the time when the matter was reported, was confirmed dead.

“The hoodlums later tried to grab the opportunity to foment trouble but the well timed intervention of the Deputy Commissioner of Police in command of operations, nibbed the matter in the bud”.

However, the State Command of the FRSC insisted that no life was lost in the incident.

FRSC Corps Training Officer, Seun Onijala, maintained that three persons have been injured, whereas the remaining three individuals have been unhurt.

Onijala said, “No one died in the accident and I’m telling you the true picture of what happened.

“The officers asked the Micra automobile to cease and the driver refused to do so and determined to show the wheel of the car to the officers at the right and left facet of the highway with the goal of knocking them down.

Sallah Amid Covid-19; The Worst in a Long Time

Wike and his Idi Amin Approach to Governance

JUST IN: Gambari Succeeds Kyari as Chief of Staff to President Muhammadu Buhari

Wike and his Idi Amin Approach to Governance

Sallah Amid Covid-19; The Worst in a Long Time